The Miss Universe annual beauty pageant just concluded last weekend (12/16/2018) and Catriona Gray of the Philippines was chosen as the winner. Now you might wonder why in the world is this subject included in a website about singing?

First, she represented the country where I am originally from, the Philippines. Secondly, and the main reason, she has a degree in Music Theory from Berklee College of Music in Boston, MA, and is a singer. Yes, Miss Universe 2018 Catriona Gray Sings.

What is our take-away from this post as singers or students in singing? That is what we’re going to find out here.

The Newly Crowned Miss Universe 2018. What We Don’t Know

Catriona Elisa Magnayon Gray was actually born in Cairns, Queensland, Australia on January 6, 1994, to a Scottish father and Filipino mother. She is an Australian-Filipino TV Host, singer, stage actress, model, and beauty pageant titleholder. Her roots and hometown in Albay, Philippines.

Her journey to pageantry started when she won Miss Little Philippines in Sydney, Australia when she was only five years old.

After finishing high school, she moved to Manila, Philippines, where she worked as a commercial model and gained popularity and eventually became one of the top models in the country. She also gained a Certificate in Outdoor Recreation and a black belt in Choi Kwang-Do when she was only 12 years old.

Before she was crowned Miss Universe 2018 last weekend, she has also crowned Miss World Philippines 2016 and the privilege of representing the country at the Miss World 2016 pageant held in the United States. She made it to the top 5 and ended third runner-up. 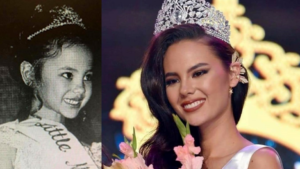 When she was 13, her mom had a dream that her daughter will be crowned Miss Universe in a red dress which actually materialized last week. She is now the fourth Filipina to win this title

Miss Universe is Not Just a Beauty Contest. It’s More Than That

Three years before being crowned as Miss Universe, she’s been volunteering in the slums of Tondo, Manila for the children living in impoverished areas, partnering with Young Focus organization.

It’s a whole package of a compassionate, intelligent, and exceptionally goodhearted human being, and this reflected in Miss Philippines’ winning answer in the question and answer portion of the pageant.

One of the questions asked by Steve Harvey, “What is the most important lesson you’ve learned in your life and how would you apply it to your time as Miss Universe?”, which she replied:

“I work a lot in the slums of Tondo, Manila and the life there is poor and it’s very sad. And I have always taught myself to look for the beauty in it; to look in the beauty in the faces of the children and to be grateful. And I will bring this aspect as a Miss Universe, to see situations with a silver lining. And to assess where I could give something; where I could provide something as a spokesperson. And if I can teach people to be grateful, we can have an amazing world where negativity cannot grow and prosper, and children will have smiles on their faces.”

Now she can have a platform to voice out her opinion and be heard on a grander scale. Having that, she can “sing any tune” she wants advocating for the underprivileged with the opportunity before her. She hoped, “… in my victory you’ll see more than just a crown and a title. I hope you’ll see a woman who is working for the betterment of others”.

In 2016, when she finished only third runner-up in the Miss World competition, she wrote this on her Instagram:

“Miss World was never just a beauty contest for me. The crown represented a journey, one that grew from being an independent endeavor to one that became more than me. A journey that rallied the support and love of my countrymen. A journey that forced me to look into myself and discover what I was made of. A journey that found its heart in the children in one of the poorest slums of my country. Yes, the crown represented a journey…until I realized that the journey could continue and exist without it. I truly believe that God always knows what’s best and I trust in his plan and perfect timing”.

With the Miss Universe title being considered higher in status than Miss World, we can conclude what she meant.

Catriona employs her singing voice in her YouTube videos to unveil awareness in her advocacies. And her singing voice has all the right things we look for a great singer. She records her songs and uses them as background music for her charity, the Paraiso Bright Beginnings Project, partnering with groups such as Young Focus and Fire Tree Asia.

What Does This All Mean to Us?

Whether she’s following her heart in beauty contests, helping the impoverished kids, or purely singing, she’s doing something wholesome with her passion.

You might have been brought here for the Miss Universe 2018 winner Catriona Gray or simply, since this is a website about singing, we can all agree that whatever your passion is, you can go out there and put it to respectable use.

I have been teaching here on this website that if you have a burning desire to sing, nothing can get in the way to your destination, whatever that may be, and be an inspiration to others.

Back to Singing To End With

A few months ago, I was contemplating if there is a portable audio device out there that can produce a finished product close to a professional studio recording. Renting a studio and a recording engineer is not very practical if you don’t have an immediate purpose for it.

My 15 year old daughter is into singing herself and loves every bit of it and the quickest way to accelerate developing that passion is to have a professionally finished product of your singing through a recording. I would love to see her out there someday to her full potential and put it to good use.

After weeks of researching, I found the iZotope Spire Studio, a portable professional quality recording that’s manageable in price, click here to learn more about it. Here is a short clip of her very first try on the machine, just opened out of the box:

Her mom can’t believe the result that she was in tears after hearing her daughter sounding like she never heard her before.

What’s your opinion about the power of music, or singing to influence other people. Leave your comments down below.