During my developing years as a singer, confidence in my vocal instrument progressed by leaps and bounds.  One of the reasons was that I started at a very young age, in my 2nd grade to be exact, I was already routinely singing on a daily basis by myself at home, at school or at community events.  I had mentioned that in the About Me page on this website.

All throughout, how to blend the vocal registers was a challenge. The voice is a complex instrument when you actually study the intricacies of it on a deeper level.  One of the things that cause confusion and misunderstanding for many singers is the voice register.

Most of us want to expand our vocal range because singing high notes with ease and confidence, brings so much energy and power into the epitome of ultimate performance. Who wouldn’t want that? I’m going to open up to you my thoughts in the following paragraphs. 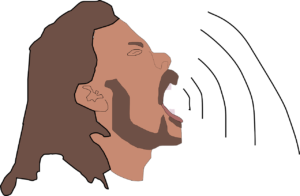 Know the Registers of the Voice – the Chest, Middle and the Head Voice

You probably heard the terms head voice, the chest voice and the middle voice. The last one is uncommon to some, but we’ll find out next.

Some call the chest voice, low register and the head voice, high register.  The middle voice is sometimes referred to as the mixed voice, the bridge or the break area and in classical singing, it’s called the passaggio. It’s the problem area where most singers have difficulty with.  I’d say it’s the transition area between the chest and head registers.

There are some other registers but we’re not going to touch on them. We’ll talk about the most common here, ok?

The chest and the head voices are utilized more often in actual singing and the middle voice is the area where most of the break or cracking happens.  We’ll talk about them further:

Middle Voice – also called mixed voice or the bridge area. The reason for it is it bridges (transitions) the separation between the chest and the head voice.  This is where the problem most of us encounter.

When we get to the “transition” area, there’s a tug-of-war between the two registers. The question of which should take over, chest or head voice, is decided by us intentionally or it becomes second nature to us by constant practice, time and patience. A break or crack occurs when they are not smoothly blended together.

Head Voice – the head voice, on the other hand, is the voice where the notes vibrate in our head or skull area as oppose to the chest. The vibration on your chest seems to disappear, but as the notes gradually descend, a percentage of the chest takes over.

The head voice is unfamiliar to some of us because we don’t use it daily and we don’t learn to speak in that region.

Before we move on, you might ask, “what about the falsetto voice?”. Let me clarify that for a second.

Falsetto vs Head Voice – What is the difference?

The falsetto voice is often confused with the head voice register.  They are not the same. The difference is the compression or “closure” in the vocal folds.  I’ll tell you what I mean:

Falsetto – Both male and female use the falsetto register. The notes vibrate in the head voice, but the vocal folds are loosely separate, creating a very breathy tone – “no compression”. This register is incapable of mixing with the other registers, specifically the chest.  Singers use it to create a lighter and breathy tone in the upper register (head voice) for an emotional rendition of a passage.

Head Voice – the notes also vibrate in the head voice, obviously, but the vocal folds are closer together to create a thicker sound in the upper register – “compressed”. Think of it as the head voice with a little piece (or percentage) of the chest register for firmer sound, as opposed to a breathy one of the falsetto.  Yes, you can blend or mix the head voice down to its neighbor, the chest voice.

Improving Your Range – Exercises to Help You Blend Your Vocal Register

I’d like to take a bit of time here to explain and achieve a vivid understanding of this next concept.  So, bear with me.  If you’re ready, let’s get to it.  This is the good news folks! High notes are achievable by anyone.

There are a number of exercises and methods out there to get your voice registers to make them as one unit and they could all work to do the job.  I will add mine and I want you to feel the physical sensations of this bridging process while doing the exercises.

Our goal is to eliminate the crack or break between the head and chest voices and make the two registers as one unit instead of two divisions and eventually improve your vocal range.

First, find out where the chest register resides without straining the neck and jaw muscle areas as you go towards your highest note. By starting anywhere on your natural comfortable range, sing an ascending “Ah” sound in a gliding manner or notes in succession, either way.

Remember, we’re trying to feel the vibration in our chest at this point. You can put your palm on your chest while doing so and feel the sensation there.

Make sure to secure and get comfortable in that area (chest) where you can sing all notes with ease all the way up to where you start feeling like having too much strain on your neck and jaw.  You can use the piano if you have one available and mark your highest note.

We’re going to pay attention to your highest chest sound because that’s where we will blend to the head voice later. When you feel like your muscles start to strain, you can stop and say that’s the highest you can go with your chest voice.

Next, like what you just did with the chest voice, let’s also find out where the head voice resides and feel the sensation of vibration in your head. Start singing the highest note in your head register and sing a descending “Ah” sound in a gliding manner or notes in succession towards the chest-resonating areas, but not past it. Stay in the head register for now.

Attempt to sing a clear and firm tone and not a breathy tone like in falsetto singing.

Remember, we’re trying to feel the vibration in our head at this point. Secure and get comfortable singing notes in that area of your voice without transitioning to the chest area just yet.

We all have the head voice, we’re just not using it enough, but it will come out if we pursue it.  You can watch and listen to others and analyze what we’ve been talking about here.

Lastly, this is where the trick comes. We’re going to do some exercises to mix the chest and head voice smoothly together.

We’ll do the Lip Trill first.

This is how it goes. With the “uh” sound, blow air out with your lips loosely together making your lips flop and vibrate like bubbling under water.

Starting anywhere in your chest voice, sing this in ascending arpeggio (notes of a chord) with my permission to go beyond the head register territory this time as high as you can releasing any muscle tension as you cross the transition area (where the cracking and breaking area) and descend back where you started.

Then repeat the same pattern half step higher each time, again, all the way to the high head voice area.  Let the vibration take over in the head as you go up and the chest as you go down, eliminating any muscle tension as you cross the transition area.

After the “uh” sound, you can now move on and substitute it with “Nay” and “Goh” consecutively, but this time with the open mouth instead of the Lip Trill we just did above.

In the next few days, I will come back here and attach some audio exercises of mine to help demonstrate what I already exhibited here.

To Sum it All Up

Expanding your range to the head voice is possible, as opposed to the old belief that you only have a very short and limited one. Primarily, it is our choice to pursue it or stay as you currently are.

Initially, you might find the transition area (mixed register) very weak and sometimes you feel like you’re doing something wrong.

Mixing, blending or balancing the chest and head voice together is unfamiliar territory.  There are exercises that can help in bridging the transition between the two, and we’ve done some of them here.

Just talking about it is only half the solution.  Nothing can replace rolling up our sleeves and get to work. It requires time, a lot of practice and patience before you eventually intensify those weak transition areas as you gain more understanding of what we talked about.

I hope this makes sense to you.  Leave a comment or question and I’ll be more than willing to help you out.